Verse Metrics’ free download single ‘Aches’ has been featured on the Glasgow PodcART blog accompanied by some kind words from Halina Rifai.

[box]‘Aches’ is a taster of what is to come. If this is a taster then I think it is safe to say that this could be the release that shows Scotland what a brilliant new export it has.

It is a huge track, and as an old-school grunge fan I almost hear threads of bands such as Stone Temple Pilots and Soundgarden interspersed amongst the mathematical rhythms and soaring melodies.

Verse Metrics have the means to tap into the brutal yet intelligent side of music and ‘Aches’ captures the essence of the band. They are well on their way to obtain mainstream acceptance whilst maintaining that firm handshake with the DIY underworld.[/box]

Verse Metrics have released the radio edit of the track ‘Aches’ from the forthcoming ‘Radians’ EP. The track can be listened to and downloaded from Soundcloud at the following link: http://soundcloud.com/abadgeoffriendship/04-verse-metrics-aches-radio.

Radians consists of the tracks

The artwork has been designed by Gordon Farquhar. 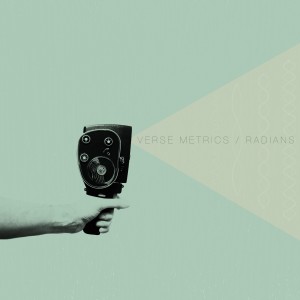 Verse Metrics can reveal the artwork and track listing for their upcoming EP ‘Radians’.

[box]Verse Metrics are delighted to announce that their new 5-track EP entitled ‘Radians’ will be released on November 30th 2012. The EP was recorded at Chem 19 Studios and mastered by TJ Lipple.

The E.P. will be launched at The Art School, Glasgow with support from We’re Only Afraid of NYC, Atlas:Empire and Little Bay with one more act TBC. Tickets will be £5 and available from Tickets-Scotland and by contacting us directly at info@versemetrics.com.

Track listings, artwork, previews and other tour dates will be unveiled in the coming weeks. 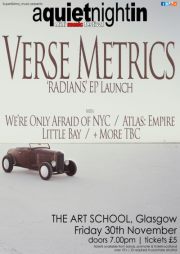 Verse Metrics are taking bookings for gigs in late October/November 2012. If you would like to book Verse Metrics or are interested in having them play near you, please get in touch via the website contact form or by sending an email to info@versemetrics.com.

It’s been almost 8 months since Verse Metrics played as a full band. The last gig was on December 31st at Box’s Hogmanay Party so, understandably, the band are keen to get back to playing live.

There will be a series of live dates during this period, concentrating on Scotland’s major cities but no doubt will include some more off-beat locations too.

For a list of places VM have played in the past, see the Gig History page.

During the month of August, Verse Metrics will be recording at Chem 19 studios with Jamie Savage. The plan is to record 5 new tracks which will be released as an EP in the final quarter of the year. Live dates will follow soon!

The all new versemetrics.com is here

FANS of twisty, turny alternative rock may be about to discover their new favourite band.

“I’ll tend to come in with just riffs for us to work with. Occasionally there’ll be more solid ideas but what’s unusual is that the vocal parts usually get written last.

“I come in with a riff, we’ll assess it all, everyone will do their own parts for the song and then we’ll rewrite it as many times as necessary until there’s a full song.”

That approach has certainly worked, given the melodic flair on recent single Modern Sleep, or the epic noise of the terrific Sad Bones, which closed their debut EP, VM1, which was released at the start of this year.

That earned the group comparisons to Death Cab For Cutie, Mogwai and the Twilight Sad, and the quartet are now working through new material, with the aim of releasing a follow-up EP early next year.

“The whole aim is to bring out something that’s as good as the first one, that’s the plan,” says Robert.

We were really chuffed with VM1, it sounds just like we wanted it to when we went into the studio.

“I’ve been in various bands and have had decent recordings, but sometimes you can be disappointed with what you end up with.

“Over the years I’ve gained a lot of knowledge of recording, so had a good idea what we wanted.

“We were really happy with the feedback we got, and have spent this year trying to make more people aware of it.”

The band have had some success with that, earning praise from various Scottish pop pundits and gaining radio airplay from Vic Galloway and Jim Gellatly, as well as a string of comparisons to other bands, including melody-heavy American act Death Cab For Cutie.

“We’ve not been compared to any bands we don’t like, actually,” says Bob.

“Death Cab are very melodic, and that’s what we’re all about. People have mentioned Mogwai and the Twilight Sad, or bands like American Football, but we’re varied in what we listen to – our bassist just listens to Korn and Limp Bizkit, and Martin [Dalziel, their drummer] loves the Deftones, so we’ve always wanted to do something that was loud and powerful.”

Speaking of powerful acts, tonight’s show sees the band joined by new outfit Arches, who are playing their long-awaited debut gig, after releasing the colossal sounding Like Fireworks single over this summer.

The connections between the two bands go back some years.

“He’s always helped Verse Metrics, and when we recorded our first song in July 2010, he was one of the first people to listen to it. We’ve fairly similar styles of music, so we definitely fit on the same bill.”