Today is the day! Verse Metrics have just launched the new video for ‘The Nightmares Leave Us All Inoperational’ over at Clash Magazine’s website.

The creepy video, set amidst a theme of anxiety dreams, was spawned with talented Israeli cinematographer Eli Lev at the creative helm.

“The Nightmares Leave Us All Inoperational’ is about anxiety dreams and getting very obsessed with the Amanda Knox case. Our last video was very carefully planned and we had very clear ideas on how we wanted the video to turn out, whereas this time we decided to give the song over and let someone else’s imagination do the work.

We absolutely love the result – it reminds us of mid nineties Smashing Pumpkins videos. We hope you find it terrifying and that you struggle to get to sleep tonight. I still think about the creepy waving dummy every day.” 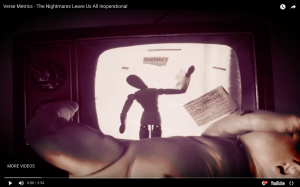 Released on 10th July, ‘The Nightmares Leave Us All Inoperational’ has been with us for a few weeks now and so far the reviews have been very positive.

Firstly, The Skinny say: ‘The Nightmares Leave Us All Inoperational – a song title that wouldn’t be out of place on a Twilight Sad record – feature’s Dick’s rich vocal alongside muscular post-punk/math rock instrumentation making for a song we’re fully on board with’
>CLICK HERE<

Fortitude Magazine applaud the ‘instantly infectious new single’ with its ‘whirring hooks and steady metronomic beats, and with the deep, baritone vocal of Robert Dick at its forefront’ creating ‘a soaring, math-rock anthem, with a perfect dose of heady nostalgia thrown in for good measure’
>CLICK HERE<

Circuit Sweet draw oblique but accurate comparisons to I Love You But I’ve Chosen Darkness and Polvo, evidencing the band as “unorthodox yet melodic” and elaborate with descriptions of an “atmospherically dense sound, strengthened by flourishes of winding guitar segments, a metronomic rhythm section and the baritone-like vocal skills of Robert Dick“
>CLICK HERE<

Here’s hoping for more to come.

What definitely is to come is a creepy/terrifying new video for the song. Stay tuned for updates.

The wonderful people over at AltDialogue have featured Verse Metrics’ new single ‘The Nightmares Leave Us All Inoperational’ on their recent playlist ‘Mixtape – Vol 2. Mental Arithmetic’ (or Arithemtic if you prefer the version on the image, which we personally do)

Verse Metrics sit alongside such Colossi Of Intelligent Music(TM) as Jean Jean, A-Tota-So, Poly-Math, Kusanagi, Iran Iran, Town Portal and the superbly named Flies Are Spies From Hell… as well as label brothers/sisters Lost In the Riots, You Break You Buy and Death and The Penguin from Lonely Voyage Records. Too many good bands to name individually!

Needless to say, you should have a look below and ‘Dae It’

Dear readers, you need wait no longer. Verse Metrics have released their first material since the 2016 EP ‘We’ll Be Listening and Remembering Until We’re Old and Unsteady’. ‘The Nightmares Leave Us All Inoperational’ is the new single…. and you can listen to it over on The Skinny’s website at >THIS LINK<

…And how about this for a quote:

[box] The Nightmares Leave Us All Inoperational – a song title that wouldn’t be out of place on a Twilight Sad record – feature’s Dick’s rich vocal alongside muscular post-punk/math rock instrumentation making for a song we’re fully on board with.[/box]

For fans of… I Love You But I’ve Chosen Darkness, Manchester Orchestra, Interpol, Death Cab For Cutie

Glasgow’s Verse Metrics are gearing up for the release of their effecting new single The Nightmares Leave Us All Inoperational, out on 10th July 2018.

Combining a sound closely related to post-punk revivalists like Interpol and Editors with a mathy, angular soundscape akin to bands such as Polvo, Verse Metrics are anything but your typical indie-rock band. Unorthodox yet melodic, Verse Metrics create an atmospherically dense sound, strengthened by flourishes of winding guitar segments, a metronomic rhythm section and the baritone-like vocal skills of Robert Dick (vocals, guitar).

Formed in 2009, Verse Metrics consist of the aforementioned Robert Dick as well as Calum MacVicar (Drums), Chris MacKinnon (Bass) and Al Conway (Guitar). Showing a willingness to experiment and expand their sound year on year, The Nightmares Leave Us All Inoperational was produced by Tom Peters (The Fall, Alpha Male Tea Party, Hyena Kill) and follows the success of their wonderful 2016 EP We’ll Be Listening and Remembering Until We’re Old and Unsteady. Verse Metrics have gained support during this time from the likes of Prog Magazine, The Scotsman, Artrocker Magazine, BBC Radio 6, BBC Radio Scotland, Kerrang! Radio and many many more.

The Nightmares Leave Us All Inoperational, out on 10th July 2018.

Verse Metrics are a groove-driven 4 piece band with a knack for writing twisty, turny alternative rock songs.
The band employ post-rock instrumentation with nontraditional song structures; and math-rock subtleties as a bed for Bob Dick’s introspective and often cryptic lyrics. These are sung with a distinctive Scottish accent in an authoritative baritone or hushed whisper to provide a signature atmosphere.

Verse Metrics released their third EP ‘We’ll Be Listening and Remembering Until We’re Old and Unsteady’ through Lonely Voyage Records on 2nd December 2016.

Past releases include two 5-track Eps – ‘VM1’ (2010) and ‘Radians’ (2012) – and the double-A-side ‘Sleep & Wakefulness’ (2011), leading to favourable reviews from well known media platforms such as The Herald, The Scotsman, The List, Artrocker, PROG Magazine and many more.

Verse Metrics are delighted to announce a raft of live shows for Summer 2017.

The string of shows include dates in Edinburgh, Glasgow, Dundee, Falkirk, Perth and Pumpherston.

Saturday 27th May – ‘Sing on The Bing’
Verse Metrics will be on the bill for the second year of Pumpherston’s music festival. There will 40 different acts looking to support the local community council in a not-for-profit event. There will be arts showcases, children’s activities and plenty of quality food and drink.

Sunday 2nd July – with Alpha Male Tea Party
Verse Metrics will support math-instrumentalist 3-piece Alpha Male Tea Party at Opium in Edinburgh. The ArcTanGent festival favourites are being hosted by Kapil Seshasayee in a night that promises to be exciting, topped off by Fox Opera.

Friday 14th July – Dundee
Verse Metrics will be bringing their English chums, Mathletics, up for a couple of dates. This one is pretty special because VM get to reconvene with multi-instrumentalist Esperi and play for the first time with the dynamic Draws Creature Mask. Redd suite is the venue.

Saturday 15th July – Falkirk
Second date of the Mathletics weekender with A Sudden Burst of Colour at Coffee on Wooer.

Sunday 16th July – King Tut’s Wah Wah Hut
This is the big one! Verse Metrics’ first time as headliners at King Tut’s in Glasgow as Part of the Summer Nights festival. With Bear Arms, Atlas:Empire and Foxes Follow this is a beauty of a balanced lineup!

Saturday 29th July – Perth
Bringing July to a belter of a close, Verse Metrics are headlining at The Green Room. Details TBC!

Also.. here’s a Spotify playlist featuring some of the bands we’ll be playing with over the shows!

Jim Gellatly has recently featured Verse Metrics on his Amazingradio show, his Sun column and his Spotify playlist for January 2017!

Jim first came to see the band at a Teenage Cancer Trust fundraiser in Bathgate in 2009 (before Verse Metrics officially existed!) and has been a loyal supporter since then. We’d like to take this opportunity to thank Jim for featuring the band and supporting us through our recent release.

Embedded below is the Spotify playlist and the Sun Article. 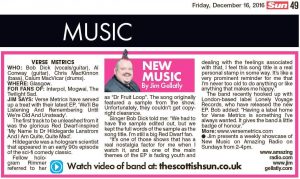 Interested in new, exciting music and not sure where to start? Grab yourself a listen to Kerrang’s Fresh Blood Playlist. Curated by Kerrang’s ‘New Music Overlord’, Alex Baker, the current incarnation lists Verse Metrics alongside such acts as Nordic Giants, Vukovi and Press to Meco.

For those with Spotify, we’ve embedded the playlist below so you only have to press play and you’re there. Get into it.

Verse Metrics participate in a feature called ‘The Band Explains’ on When The Horn Blows. Karla Harris poses 5 questions about the relationship between the video and the song ‘My Name Is Dr. Hildegarde Lanstrom and I Am Quite, Quite Mad’.

Bob tells a story about an unusual heirloom and nearly being mistaken for a criminal, as well as explaining some of the reasoning for some of the scenes in the video.